New Hampshire is being eyed as the new Gold Rush state by private transmission and renewables developers looking to find cheap, open-door routes to the lucrative southern New England energy markets. The passive regulatory climate, legislative inaction, and outdated eminent domain provisions can only encourage profiteers to set their sights on New Hampshire and strike it rich.
The Franklin-to-Claremont 345kV Transmission Line
The first post in this series looked at the possibility that, if Northern Pass is built, PSNH/NP would then construct a new 345kV transmission line from the Franklin converter station west through the NH towns of Claremont, Newport, Croydon, Sunapee, Springfield, Wilmot, and Andover to join up with VELCO's Southern Connector line in Coolidge VT. The existing Franklin-to-Claremont ROW would likely have to be widened (read: eminent domain) to accommodate towers for a new 345kV line. A plan like this might explain why Northern Pass just bought 118 acres in Franklin at a whopping price of $2.35 million for a converter station. That's a lot of land. A Northern Pass official has repeatedly been queried if this is in the cards and declined to answer. The Franklin route is a roundabout way for Hydro-Quebec to inject power into Vermont, but if New Hampshire's eminent domain law remains weak, it would be an attractively cheap option.
Meanwhile, Back in New Hampshire
PSNH has embarked upon another project that may point to the desire of other gold rushers to ship Canadian renewables through New Hampshire from the east. Over the summer, or possibly earlier, PSNH decided to "reestablish" and "monumentate" (mark) its ROWs in the southern and eastern parts of the state. They awarded the contract to Doucet Survey Inc. of Newmarket NH. The award was a big deal; it's the "featured project" on Doucet's website. Here's Doucet's progress report on the work:
Field work has been completed on a 51 mile PSNH job awarded to Doucet Survey this past summer.  A 19 mile section stretching from Deerfield to the Maine border, as well as a 32 mile section from Fitzwilliam to Amherst has been the focus of this large scale project.

The survey work included re-establishing the PSNH right-of-way (ROW), monumentation for the ROW, and delivering the detailed description and location of the monumentation.  DSI combined a number of different technologies to accomplish this task including GPS and conventional surveying.
PSNH has kept the project quiet; there was no "news release" about it. With all the effort and expense to reestablish the PSNH easement and to mark it, it sure sounds like somebody is planning to build something big. Residents of towns along the ROW would be well advised to have their senators find out who and what.
Deerfield to Maine (19 miles)
The 19 mile PSNH easement from Deerfield to Maine crosses through the following towns: Northwood, Strafford, Rochester. These are in Senate districts 4, 6, and 17. The Senators in these districts (Groen, Forsythe, and Barnes) all voted for 648 in June. On behalf of their constituents, they should be inclined to get to the bottom of what purpose the PSNH easement work in their districts serves. 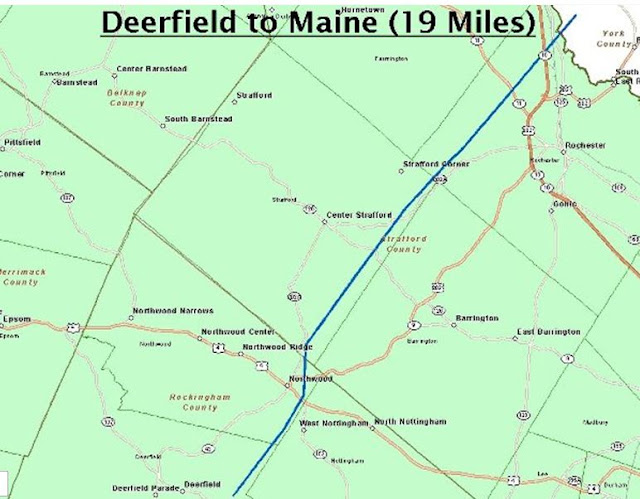 PSNH's 32 mile easement from Fitzwilliam to Amherst crosses the town of Rindge, New Ipswich, Greenville, Mason, Milford, and Brookline. These towns are in Senate districts 10, 11, and 12. Senators Kelly (11) and Luther (12) voted against 648 in June; Senator Bragdon (10) voted for 648 in June. They should also be asked by their constituents to find out  what the purpose of PSNH's easement work is. 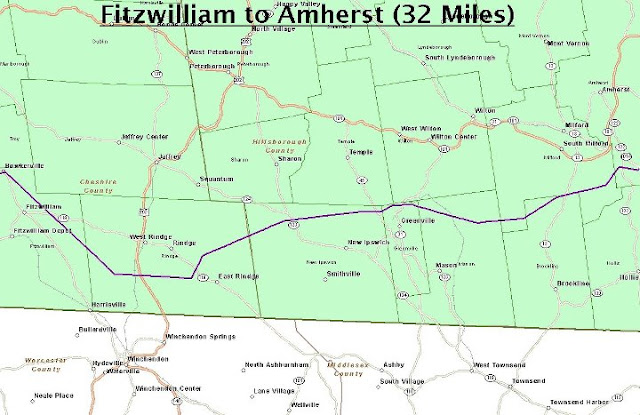 Why is PSNH reclaiming its turf at this particular time? What plans do they have for these ROWs? New Hampshire rate payers have the right to know what they are paying for. And if it's to allow another gold digger like Northern Pass to try to scar New Hampshire with more new transmission lines, the sooner New Hampshire knows, the better.

As long as New Hampshire's eminent domain protection remains as weak as it is, we can expect to see more maps, more lines, more dreams of cashing in on this state.

The concluding blog in this series examines the transmission lines that utility developers are dreaming about running from Canada and Maine through the Lakes region and southeastern New Hampshire.
Posted by NH Jean at 8:35 PM