Transmission Solutions: "Cutting the trees back is as dumb as it gets"

Editorial cartoonist Bob Englehart published the following cartoon in the Hartford Courant (9/14/2011) in response to Governor Daniel Malloy's observation that the big culprit in CT's massive power outage during Irene -- 800,000 in the dark -- was "trees with branches that extend over power lines and can break in high winds and take the lines down." A Northeast Utilities subsidiary, Connecticut Light & Power, chimed in eagerly, that "situation is easy to fix." Englehart's commentary, "Oh sure, take it out on the trees," follows after his cartoon and lampoons both the governor's comprehensive review and the antiquated delivery system of overhead lines. 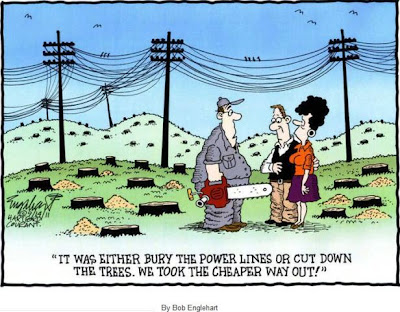 "Oh sure, take it out on the trees. The antiquated electricity delivery system uses 19th-century technology to deliver power to 21st-century gizmos, and the wise men in charge say cut the trees back. Bull! Even if we cut down every tree in the state, some drunken idiot with a 4,000 pound car will smash into to one of those stupid power poles and bingo. Out of service. A lightning strike could disable half a city in a flash.

"You know, Indians use to climb these same kinds of poles and cut the telegraph wires back in the 1800s. Just sayin'.

"There is no way to make things better other than burying the electrical lines. We depend on electricity as never before. The modern focus has to be on generating it cleanly and distributing it intelligently. Cutting the trees back is as dumb as it gets. I'm surprised the governor has embraced this plan, although a lack of imagination may be one of his weaknesses.


"There is a way to deliver electricity either wirelessly or underground. The geniuses who can do this are in our midst. I know, I know, the naysayers are saying nay, just as they did back in the day when Chester Gould put a radio on Dick Tracy's wrist. People thought of it as science fiction, impossible, too expensive, can't be done. Hell, now I play golf with a guy who has a GPS on his wrist that tells us how close we are to the green. I'll tell you something else; its juice doesn’t come through wires." (Englehart commentary, Sept. 13, 2011.)
Posted by NH Jean at 7:51 PM