The Northern Pass project was rolled out early in Massachusetts and Connecticut as "affordable." In Spring 2009, a Massachusetts publication, Affordable Energy News, explained why a participant-funded (private) line was so attractive; at a conference in Hartford in October, 2010, HQ-US also touted the low costs of Northern Pass to rate-payers. 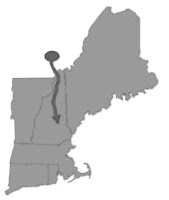 "A frequent and often tumultuous debate around new transmission lines is who would pay for the costs associated with the new line. According to the proponents, 'the transaction proposed by the Petitioners resolves difficult and highly contentious cost allocation for new transmission. . . .
If the (proposed) HVDC Line were constructed as a Market Efficiency Upgrade and included in regional rates, the costs would be spread throughout New England, which is almost certain to create opposition'."

Instead, Hydro Quebec-US would directly pay for construction costs and receive transmission rights over the line, taking the risk of selling enough power to recover costs. Thus, the project would avoid "difficult issues regarding the benefit that different parts of the region would receive and the associated difficulties related to transmission cost allocation for a non-reliabilty project." Connecticut also supported the instant transaction and the funding mechanism, the article notes. It's easy to understand why.

(The full text of the article is here.)

On October 4, 2010, Steve Molodetz, VP of business development at HQ-US, addressed a business conference, "What's the Deal?," in Hartford CT.  Molodetz also stressed that Northern Pass would be a participant-funded venture with “zero impact on transmission rates” and no government or ratepayer subsidies, according to the report of the conference sponsor, the Connecticut Business & Industry Association (CBIA).

Mr. Molodetz's power point presentation dated 9/30/2010 may be seen here. "Benefits to New England" of Northern Pass are on page 16.

New Hampshire is not just a line on a project map, however. If the true full costs of the proposed project were calculated and borne by those in Southern New England who stand to benefit from it, Northern Pass would not be so "affordable" and attractive. These costs would far exceed compensation for NH land purchased or taken by eminent domain for new and widened ROWs. They would have to include the impacts of the 140-mile transmission line on New Hampshire tourism and recreation, real estate values, property taxes, jobs, lost income and home equity, and more.

But even if a "user-pays" or true cost internalization system were adopted, it could never compensate for what is beyond price: a pristine backcountry, the White Mountains, the Great North Woods, physical places that are ideas in the mind as well, refuges for the urban weary, for the many people in Massachusetts and Connecticut, Rhode Island, and down below who flock across our border in search of solitude and its wilderness values. These things cannot be bought; they are not for sale.
Posted by NH Jean at 9:38 PM

Easton NH has just completed writing its articles for the Town Warrant to be voted upon at the March meeting. The town is making more than a symbolic gesture to oppose the Northern Pass, as you will see in the following text. Easton hopes that other towns will do likewise and requests that you bring this to the attention of your selectboard.

Warrant Article: To see if the Town will vote to support the following resolution:

WHEREAS the Northern Pass Power Transmission Project as presently proposed would pass through the Town of Easton and the White Mountain National Forest, and

WHEREAS this project would blight the landscape and devastate the values of properties within its transmission corridor and adversely impact fragile wildlife habitat and wetlands located within said forest, and

WHEREAS this project would make the area less attractive for outdoor recreational activities and tourism, now be it

RESOLVED that the Town strongly opposes this project, and that a copy of this resolution be sent to: our governor, state and national senators and representatives and to the New Hampshire Public Utilities Commission.

Warrant Article: To see if the Town will vote to raise and appropriate the sum of $2,500 to be expended by the Selectmen at their discretion to oppose the Northern Pass Power Transmission Project.
Posted by NH Jean at 12:27 PM