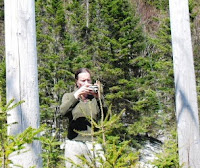 A guest blog by Kris Pastoriza, Easton, who hiked up along the PSNH power line and Reel Brook Trail to the Kinsman Ridge on Saturday, April 30. The power line crosses a smaller bog on the west side of the ridge and then an extensive bog on the east side. Kris and her companion hikers will return at a dryer time to year to enter the latter, extensive high elevation wetlands known as Bog Pond. Kris's trip photos are here.

In the scoping comment for the New Hampshire Fish and Game Department, Environmental Review Coordinator Carol B. Henderson writes that “physical examination of the areas proposed to be newly constructed and impacts to the existing transmission corridors should be included, in order to determine minimization of impacts proposed by this project for all NEPA requirements.” Accordingly, our party of three hiked up the Reel Brook Trail, in Easton, on April 30th, to examine the existing PSNH transmission corridor, and document the extensive Bog Pond wetland area through which the corridor passes.
We followed the Reel Brook Trail for approximately one mile. This section of the trail was not exceedingly wet, and the stream crossings posed no real difficulties.  We passed under the powerlines and shortly after crossed a stream.  We then followed a short access road north up to the powerlines, at about 2,000' altitude, and hiked beneath them. Up to this point it appeared that the club mowers were able to access the corridor, but where we crossed to the corridor it became quite steep. At the top of this slope was a steep, deep slope down to a river crossing. The clearing here had been done with chain-saws, and the trees left where they fell. There was a small stream at the bottom, and another steep slope up, on which lay two power-line poles, which had apparently fallen and been replaced, as their “stumps” were at the top of the ravine.
We continued up on less steep terrain, past a beautiful rock face and waterfall on the left, with cliffs visible high on the side of South Kinsman. Looking west the Cooley-Cole ridge was clearly visible, with the mountains of Vermont beyond. The terrain became increasingly wet and boggy, and as we scrambled up another short, steep rocky section, we came upon an intact set of insulators, and farther on were cross-pieces from fallen poles. There were roughly seven pole stumps on this upper section of the lines, possibly due to high winds funneling through the notch.
At the top of this steep pitch was a large pile of sand, apparently imported, since the soil was peaty.  Beyond was a bog with spaghnum moss and labrador tea. It had several deep, narrow streams flowing through. Steep hills were on either side, and we were forced to work across the bog and onto higher, snow covered ground to get around it. At this section the lines angled from southeast to almost directly east, as they passed over the bog. Several of the poles were in standing water.
At the far side of this bog, the corridor became a small stream bed. The slopes leading down to the stream were covered with small softwoods which had been trimmed at about 2' with chain-saws or weed-wackers. We worked our way down through the fallen slash to the stream and followed it up to rockier ground where we came upon the Appalachian Trail entering on the right. Shortly after, the trail opened up to a stunning vista of the Bog Pond area, with Loon and other summits in the Pemi range beyond. The PSNH poles led straight down and across the bog, through standing water, with the largest pond south of them. Snowmobile tracks were visible beneath the lines.
We headed down the AT, putting on snowshoes about five minutes into the woods. The AT was poorly blazed, (thanks to Sherpa for route-finding) but from the junction the Reel Brook Trail was clear and well blazed in blue. We wore snowshoes until we were about ten minutes above the stream crossing where we had left the trail on the way up. The snow was 2'-3' deep on the upper sections of the trail, and a moose or two had recently traveled the Reel Brook Trail.
This was so clearly an area where the lines should never have been allowed to go. There must have been extensive damage and erosion during the construction, though, sixty years later, that is covered. There is no way to put new towers, concrete, access roads, and lines up there without unthinkable amounts of destruction. The “project” route must have been thought up by a bunch of people who either didn’t know or didn’t care about the terrain that is there.
﻿
Posted by NH Jean at 9:50 PM