·         Shivery sets a deadline of 6 months, by the end of the second half of 2011, to announce the new “northern” route for NP.  NP is clearly working on the route, and Shivery is putting his credibility on the line by saying that the new route will be announced within 6 months.
·         Shivery sells the message that the only problem from stakeholders with the NP route occurs on the top 40 miles.  He gives no credence, airtime, or indeed any mention whatsoever to any other issues raised regarding NP, and he gives no notice to the investment community about the problems with the existing PSNH ROW.
·         Shivery mentions the new FERC transmission planning and cost allocation order (Order No. 1000) and tries to suggest it is good for Northern Pass. In fact, it is irrelevant to NP as currently designed.
·         For those who don’t understand the difference between “reliability” and “optional” projects, note that the vast majority of the discussion of transmission on the call is about traditional reliability projects – determined by ISO-NE to be “needed” and qualified or to be qualified for inclusion in the customer rate base.
·         “Earlier, Chuck discussed some of the recent developments concerning the Northern Pass project. Recall that the project involves 180 miles of new transmission line in the state, including an AC section in Southern New Hampshire. Of those 180 miles, we currently have right of way for 140 miles. Our focus right now is on the 40 northernmost miles where we need new right-of-way,” Olivier says. There’s a misleading statement.  NU is trying to take analysts off any scent that there are problems on the existing PSNH ROW.  As we know, contrary to the statement, they DO NOT “have” the necessary ROW for the 140 miles!!! All those so-called expansions would also have to be new ROWs, for one.
·         “We continue with our outreach in New Hampshire stakeholders and communities as we identify and secure a route for those 40 miles and hope to announce such a route later this year. We are making solid progress in this effort.”  There’s a clear statement to the investment community that NP is making tangible progress on the new northern route.  If this is true, we need to worry…
·         The new timeline:  “This process of identifying routes and providing stakeholders with time to review and comment has added about an additional 9 months to the siting process. That is why we now estimate that the construction will begin in early 2014.”
·         “As a reminder, the project has a number of benefits for New Hampshire and the region. It is expected to add more than $25 million a year in local property tax revenue and add 1,200 construction jobs. We estimate it will reduce the region's wholesale electric cost between $200 million and $300 million annually, including at least $30 million that would accrue to New Hampshire, and reduce CO2 emissions by as much as 5 million tons a year.” NU's Olivier has now wrapped around NP’s claims in an official statement to the market. This statement is now fair game for any challenges that it is inaccurate and/or misleading under federal securities law concepts.
Posted by NH Jean at 9:16 PM

Another entry has gone "missing in action" on the Northern Pass website. The journal post, "Digging into underground," disappeared between Friday afternoon, July 22, and Monday morning, July 25. The announcement of a delayed project completion date from 2015 to 2016 vanished even faster, sometime between 9 a.m. and 9 p.m., August 2. (See Before and After, following.) Along with the latter disappeared the residual dead link to the post removed on July 25, "Digging into underground." 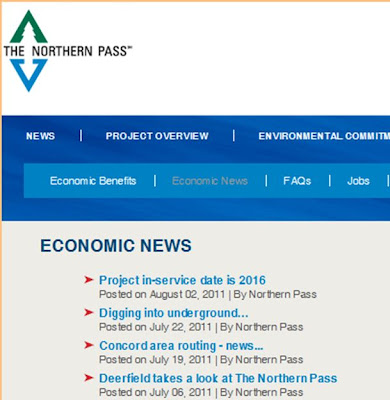 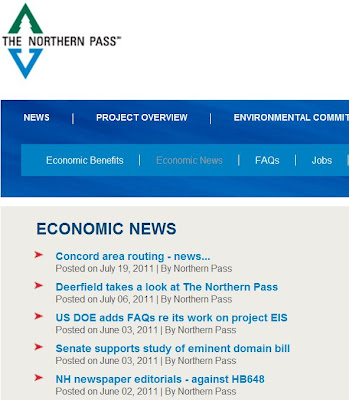