New Hampshire is being eyed as the new Gold Rush state by private transmission and renewables developers looking to find cheap, open-door routes to the lucrative southern New England energy markets. The passive regulatory climate, legislative inaction, and outdated eminent domain provisions can only encourage profiteers to set their sights on New Hampshire and strike it rich.
Silences, Known Facts, Questions
The  first blog in the "Gold Rush" series examined a Franklin-to-Claremont-to-VT line that a Vermont transmission developer, VELCO, has on its maps, but PSNH/NP won't talk about. (VELCO calls this line the "Deerfield Alternative," "Deerfield-Webster-Coolidge" line, "NH-VT Connector," etc., and presented it as a 345kV project as recently as spring 2011.) The second blog discussed the reestablishment of a 51-mile ROW across southern NH that Doucet Survey Inc. has on its maps, but PSNH doesn't mention in its abundant promotional materials.
These blogs lay out the few public facts: in a federal filing, NP's James Muntz called the Franklin converter station an attractive "jump off point," and NP's Brian Bosse expanded on that description last month to note Franklin's strategic location at an east-west junction in NH. Doucet Survery is busy surveying and marking anew PSNH's ROW from Fitzwilliam NH to the Maine border.
From these known facts, two obvious questions arise. First, it's clear why a new PSNH transmission line would "jump off" to the west of Franklin in order to inject Hydro Quebec power into Vermont, but why would one jump off to the east? Second, the Doucet Survey map shows the reestablished PSNH ROW passing through Rochester and ending at the Maine border? What would it connect to?
The Gift Catalogue
Both questions are readily answered by consulting the transmission developers' gift catalog of new lines to dream about. It's called "The New England 2030 Power System Study: Preliminary Maps and Cost Estimates for Potential Transmission."* It was prepared in August 2009 by the Planning Advisory Committee of ISO-New England. Projects come in Small (2000MW), Medium (4000MW), Large (5500MW), Extra Large (8000MW), and Jumbo (12,000MW) sizes. Line sizes vary from 345kV to 765kV. There are two basic models to choose from: wind and off shore wind. Plus some miscellaneous other unidentified models from Canada, probably hydropower and nuclear. In all, the gift catalogue presents transmission developers some fifteen map scenarios to drool over.
Answers
Why would a developer build a transmission line east from the Franklin junction? What does the PSNH reestablished ROW connect to? The "gift catalogue" has some answers to these interrelated questions. The highlighted yellow line on the following map shows a new 500kV or 765kV line running east from Franklin across the Lakes region to connect to another new NH transmission line, most likely on the ROW that PSNH is reestablishing right now. And both would ultimately connect to wind generation projects in Maine and further north in Atlantic Canada. 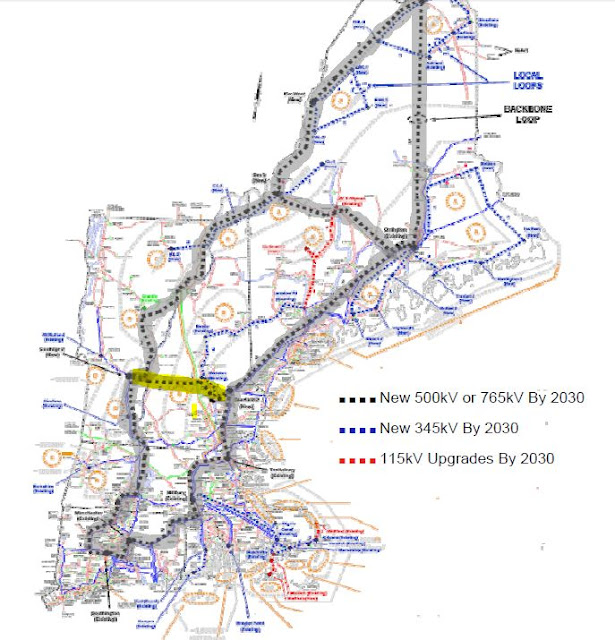 There are other new lines projected across New Hampshire on this map, blue ones in the Seacoast region, the central eastern part of the state, and across the southern border for potential new 345kV lines by 2030 as well as another jumbo 765kV line across Coos County and the western part of the state. The fourteen other maps similarly crisscross the state with new power lines to ship Maine and Canadian renewables to southern New England (note the blue connector lines to Boston, the jackpot). It's enough the give a transmission developer a case of gold rush fever.
Transmission Run Amok
The "Power System Study" is a sobering document for anyone who lives in New Hampshire. It shows what the state could look like in less than twenty years if the gold rush stampede is not checked now with both a rational curb on optional utility projects and the passage of legislation that enacts eminent domain protection. Virtually no part of the state would be free of huge towers -- the North Country, the White Mountains, the Lakes region, the Seacoast, western and southern New Hampshire. And all this despoliation to transmit power south to Boston, Hartford and beyond (yes, there's a scenario for New York, the ultimate jackpot).
If anyone would dismiss the "Power System Study" as hypothetical and deliberately expansive, they deny the reality that Northern Pass, once a blurry line in some prior gift catalogue, has menaced thousands upon thousands of New Hampshire residents for over a year now. With the advent of participant funded transmission development, New Hampshire must wake up, realize that the entire state is already in the cross hairs, and pass effective protection for property rights now.
The "Gold Rush" series ends with this post. It's not that there aren't more maps that show more lines drawn across more NH towns, but that the point has been made sufficiently: an optional transmission project can't wait to come to your town soon if you stand idly by.
Contact your senator before January 18, 2012. Insist that property rights in New Hampshire be fully protected against abuse.
____________________________________
* The "Power System Study" maps, a 4MB file, may be viewed here.
Posted by NH Jean at 7:24 PM