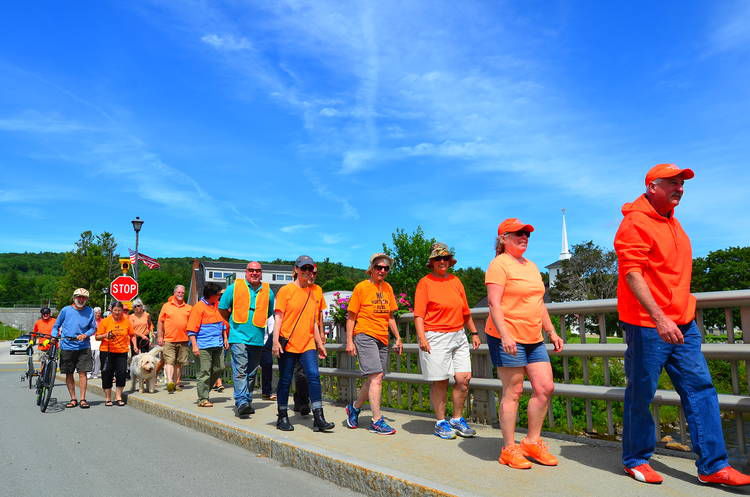 Hoping to make a statement to the committee that will decide if Northern Pass will be approved, dozens of orange-clad opponents were disappointed Friday after members of the N.H. Site Evaluation Committee made their site visit more than an hour earlier than scheduled. (Photo by Robert Blechl)


FRANCONIA — Seeing it as an opportunity when they could almost be face to face, opponents of Northern Pass were hoping to make a statement to members of the N.H. Site Evaluation Committee, which made a site visit Friday afternoon.

Instead, NHSEC members arrived more than an hour before their scheduled visit in Franconia and were gone after about 10 minutes, before virtually all of the several dozen opponents, wearing orange and some holding “No To Northern Pass” signs, arrived.

“We were going to be polite,” said Lisa Cutler, of Easton, who, with her husband, Ned, chair of the Easton selectboard, arrived a half hour before the estimated 2:15 p.m. visit by the NHSEC.


The committee is visiting portions along the Northern Pass route to study the impact the proposed transmission line would have.

As project opponents trickled into downtown, they were disappointed to learn of the early arrival. Some voiced suspicions it was a deliberate attempt by the NHSEC to avoid area residents turning out in Franconia, which has been a hotbed of Northern Pass opposition.

“To me, this is a public process and the public should see what they’re doing,” said Nancy Martland, of Sugar Hill.

The NHSEC should have visited to see not only what would physically be impacted by the project, but to see the people who would be impacted, said Kevin Johnson, owner of the Gale River Motel in Franconia.

“They avoided it by getting here an hour earlier,” he said. “It makes me question the objectivity of the committee and if they are interested in really weighing the pros and cons … People took time out of their day to come here.”

Two of them were Bob Sherburn and his daughter, Alyssa Sherburn, who run the Pinestead Farm Lodge, in Franconia, which has been in the family for generations.

“This is unfair,” said Bob Sherburn.

The Northern Pass line would run under Route 116, right in front of the main Pinestead farmhouse that regularly welcomes guests, said Alyssa Sherburn.

“This would really disrupt business,” he said.

Opponents favor burial, but many want a fully buried line, along Interstate 93, and not through downtown Franconia and Easton, where they say businesses would be hurt through two seasons of construction and ripped up roads, which they contend would also negatively impact residential properties.

The NHSEC is the entity that will decide whether or not to issue Northern Pass a certificate of site and facility, which is needed for the estimated $1.6 billion, 1,090-megawatt-capacity, 192-mile transmission line to advance. The NHSEC could make its decision later this year.

As proposed, the line would be all overhead except for 7 1/2 miles of underground line in Coos County and 52 miles underground from Bethlehem to Bridgewater.

Because they were on the road Friday, NHSEC administrator Pam Monroe and committee members were unavailable for comment and it was undetermined why the committee showed up more than an hour before their scheduled time in Franconia.
On Thursday, NHSEC members arrived in Coos County for site visits in upper Coos that included Pittsburg, where the line would cross the international border, and Clarksville.

On Friday, after visiting Stark and Weeks State Park in Lancaster, which would have views of overhead towers, they visited Bethlehem and Franconia, which, along with Easton and Sugar Hill, would have buried line along state highways.

According Kenneth Bowes, engineer for Eversource Energy, the parent company of Northern Pass, the traffic control at Routes 18 and 116, where the line would make a sharp right and cross under the Gale River, “is probably the more complicated of any of the locations along the route …”

At the moment, the big legal challenge that appears to be shaping up against Northern Pass in the North Country is the project’s use of local roads.

Last week, the Easton Board of Selectmen wrote Victoria Sheehan, commissioner of the N.H. Department of Transportation, to request that the NHDOT enforce N.H. RSA 228:25, the statute on the reestablishment of highway boundaries.

The RSA states whenever it is the opinion of the NHDOT commissioner that the boundary lines, limits, or locations of any highways become lost, uncertain, or doubtful, the commissioner can reestablish them the same as they were originally established.

“At issue here is a private project proposing to use public roads for a highly invasive project,” the Easton selectmen said to Sheehan. “Its size and length are unprecedented in New Hampshire and the majority of road abutters do not know what the road width is, and therefore are unable to defend their property rights, when they even know that there is an issue of unknown width.”

The Easton board members said many people assume that when the state took over the roads, it set a standard right-of-way width, but that is untrue.

“Abutters and travelers have a right to a clear determination of road widths, yet what is being proposed is a permit of a project which has not provided adequate proof of ROW widths,” wrote the selectmen. “Even with all the relevant information in hand, some roads on the proposed route were laid out without the width of the road being specified, so there is inescapable uncertainty about the road boundaries.”

See the companion piece to this post here.
Posted by NH Jean at 6:53 AM