New Hampshire is being eyed as the new Gold Rush state by private transmission and renewables developers looking to find cheap, open-door routes to the lucrative southern New England energy markets. The passive regulatory climate, legislative inaction, and outdated eminent domain provisions can only encourage profiteers to set their sights on New Hampshire and strike it rich.
The Franklin campground purchase
PSNH stepped in it again the other day when it trumpeted to NH newspapers and the AP that it had just spent $2.35 million to acquire a moribund campground in Franklin appraised at $653, 000 (Concord Monitor, Dec. 12; Union Leader, Dec. 13). After it lost out on the Balsams deal the previous week, PSNH evidently needed to save face in front of the investors, who were expecting to hear the new Coos route announced by the end of this month.

Instead, the investors heard that PSNH had just spent 400% of the appraised value of a 118-acre property on which to build a converter station in Franklin for the Northern Pass line. The rate payers also heard and almost immediately they wanted to know if any part of their money had gone to fund speculative purchase of a campground for an as yet unpermitted project:

. . . it's appalling, and truly scary for ratepayers, to see PSNH or its affiliates going heavily into land speculation. What does PSNH know about land investments? Probably a lot less than they know about keeping the lights on, which means their expertise, if any, is just a click above zero.

Where is the state's Public Utilities Commission to check up on our hapless PSNH's efforts to become statewide land barons? Has the Commission done the work to assure ratepayers that PSNH is not going off on another bankruptcy-inducing escapade? Or is the Commission forgetting to connect the dots?

A few questions for the Commission.

Why is PSNH (or its affiliates) spending time and money on land speculation? Is this good for ratepayers? Has this been approved by the Commission?

Where is PSNH getting the money to speculate in land in the hope that Northern Pass might get approved? Are they using ratepayer money?

What are PSNH ratepayers getting in return for the diversion of PSNH's management time and attention?

Have the required "affiliate contracts" for these transactions been filed with the Commission, as is required under RSA Chapter 366? Could the Commission kindly disclose any such contracts on file, so ratepayers know what's going on? Has the Commission reviewed the contracts? Has the Commission asked for the necessary information to see if these affiliate contracts are damaging to ratepayer interests? [Union Leader comment, December 13, 2011]
The last time PSNH shot itself in the foot this way was when it announced in July 2011 that the substation upgrade in Deerfield increased the tax revenue benefit of Northern Pass to the town. Oops . . . if that were true, PSNH/NP had admitted to starting construction illegally without a site evaluation permit. PSNH backed and filled, asserted that the substation had nothing to do with Northern Pass, and lowered the estimated tax benefit to Deerfield, although NP's website still has not corrected the figure. We'll probably hear similar noises about the required affiliate contracts here.

But the campground purchase raises yet other questions: why was Franklin initially chosen as the site for the converter station and why was the 118-acre Franklin campground apparently not the first choice in Franklin for it? Whatever the residents of Franklin may think about their new benefactor, surely PSNH did not choose Franklin to help the town climb out of its financial bind. And we can only speculate that the original Franklin site was too small for the converter station.

NP's James Muntz actually answered the "why Franklin" question a year ago:

The 40-mile AC Line from Franklin to Deerfield extends the existing 345-kV bulk power system further north into New Hampshire. This part of the NPT Line may provide an attractive “jump off” point for additional reliability-based 345-kV upgrades in the future as loads grow. Potential reliability projects enabled by this extension include the addition of autotransformers in Franklin to enhance reliability in that region and further expansion of the 345-kV system to points north or west to meet future reliability needs in either New Hampshire or Vermont. (TSA filing, p. 303; emphasis added)

An attractive "jump off point"
Brian Bosse, an engineer with NU who is involved in the NP project, said much the same thing at a Goffstown Rotary breakfast last month. In answer to an audience question of "why Franklin?" for the converter station, Bosse explained that Franklin is a “strategic location” to convert to AC because it is at a north/south and east/west crossroads for power in NH. Converting to AC there opens up the ability to tap into that power in the future. Bosse said he had no knowledge of any plans to do so.

Dreaming up transmission lines
Bosse may not know whether anyone has been dreaming about running high voltage transmission lines east or west from the Franklin converter station, but here's a 2009 map that draws a line from Webster (i.e., Franklin) west to Vermont's now completed Southern Connector line for a new 345kV transmission power line, the ultimate source of which is Hydro-Quebec: 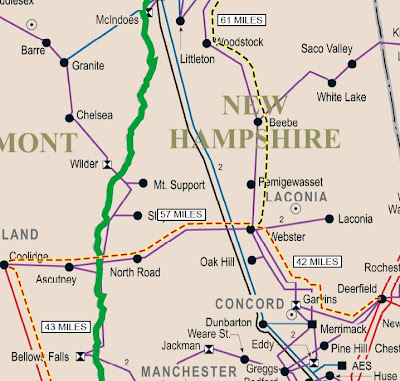 Whoever dreamed up this transmission line using Franklin as the "jump off point" for Hydro Quebec power would build towers from Franklin to Claremont through Newport, Croydon, Sunapee, Springfield, Wilmot, Andover, and other towns. (This line runs through towns in Senate districts 5 and 8, and both its senators, Matthew Houde and Bob Odell, respectively, voted against passing a bill, HB 648, that would strengthen eminent domain protection last June.) How much "widening" (read: eminent domain) would be required on the existing easement to include this new 345kV line?

(You can read more about the idea of connecting Northern Pass from Franklin to VELCO's  Southern Connector line in Vermont here and, more recently, here, as VELCO's CEO Dutton talks about the Franklin line as an "injection point" for Hydro-Quebec's power into Vermont.)

Note that power from Quebec would go to Vermont via New Hampshire, something less than a direct route. Why? One reason is because Vermont has stringent regulations about aesthetics. Vermont will be burying its DC line in Lake Champlain. The new merchant-funded transmission developers looking to strike gold and cash in on Canadian renewables will try New Hampshire first. Wouldn't you? A weak regulatory climate and a legislature that so far has been diffident about passing updated eminent domain protection for property owners are leaving the door wide open. Transmission developers will always be attracted to states with weak eminent domain protections.

Subsequent blogs in this "Gold Rush" series will show you more maps of New Hampshire with potential high voltage transmission lines that may be drawn across your town. There's no dearth of gold rushers out there just waiting to cash in on New Hampshire.

Part 2 of the "Gold Rush" series is here. The series concludes here.
Posted by NH Jean at 8:35 PM