Northern Pass has added some new "visual simulations" of towers to the "News & Info" page of its website. Let's take a look.


Here is the "visual simulation" of existing poles (left) and the proposed new transmission towers (right) at Forest Lake Road, Whitefield. (There's another pole to the right the same height as the ones on the left). Those towers sure are ugly, aren't they? But let's stick to the numbers for now. Those towers are about to get bigger (and uglier). 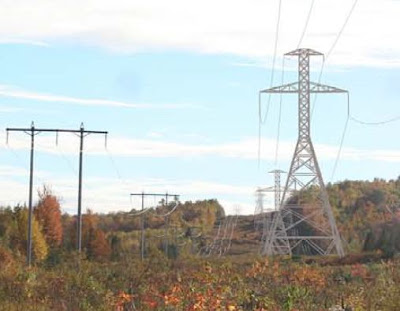 The existing front pole on the left measures 2-1/8" high in this browser; the simulated front tower on the right measures 3" high. Let's round it off to a 2:3 ratio. Do the math. Let's assume that the front pole is 56'; the front tower must then be 84'. That seems about right.

But which "objects" are smaller and which larger? Never mind. It's all still "preliminary":