Off the beaten path: PSNH infomercial lunches for state legislators

On its own letterhead (following), PSNH is inviting some NH state legislators to Northern Pass "infomercial" lunches at seven different venues in August and September. With the exception of a convenient Concord location next to the Capitol, none of the venues is on or near the proposed 187-mile Northern Pass route. Who's picking up the tab for wining and dining legislators at the Portsmouth Sheraton, Lake Opechee Inn & Spa, Nashua Crowne Plaza, and other upscale facilities? PSNH ratepayers? This follows upon the recent mass mailing of "We've listened" pamphlets promoting Northern Pass to every single consumer of electricity in the state (at a cost that PSNH will not disclose). Are PSNH ratepayers picking up that tab too? Think this is all too much? Tell your legislator. And, if your legislator received the invitation to lunch, please tell him or her what questions you want Northern Pass to answer. The first one might be, who is paying for my meal?

(No "Open Houses" for residents and landowners have yet been scheduled in towns along the existing PSNH right-of-way that Northern Pass claims it can use.What will PSNH serve at the "Open Houses" for the actual NH citizens who will be economically impacted by the proposed overhead project? ) 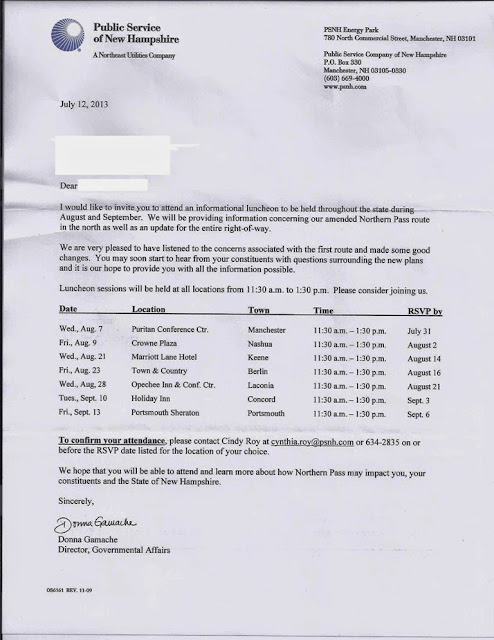