Northern Pass Newsletter Alert!
Newsletter #2 looks like more of the same "pious baloney" that Newsletter #1 brought us. But read it carefully . . . .
Northern Pass has just issued its second newsletter to “Northern Pass Landowners.” There they go again! We’ve explained before that there is no such person as a “Northern Pass Landowner.”  Northern Pass is still an idea on paper; it has no regulatory status whatsoever. Some of us do own land in NH that has an easement deeded to PSNH on it. This does not make us “Northern Pass Landowners.” Northern Pass is not PSNH. Northern Pass continues to use a dishonest term that attempts to get us to agree that our land rights (easements) are the chattel of Northern Pass. They seem to think that if they say it often enough, we’ll believe it.
Much the same can be said of the rest of the second newsletter. It’s full of half-truths, misleading statements, and spin. For instance, the newsletter says that “landowner outreach specialist” Jim Wagner visited folks, originally negative about Northern Pass, who were glad “to learn the other side of the story,” but it doesn’t tell you that Jim Wagner has also visited folks who detest Northern Pass and didn’t change their minds after his visit.  The newsletter has a feature piece on Brian Underwood, an appraiser hired by Northern Pass who not surprisingly concludes that HTVL lines won’t significantly lower your property’s value, but it does not tell you that Underwood declined to undertake a full scale "before-and-after" certified study like the one that shows a 60-90% drop in values of land in Dalton. He knew better.
Or look at the newsletter’s picture of an undammed river rushing under a high trestle bridge; the image is captioned “clean renewable power.” One of the several reasons that hydro power from Quebec is not classified as “clean,” “green,” or “renewable” in the U.S. and in NH is that huge and environmentally damaging impoundment dams are used to create it. Hydro Quebec’s electricity is not generated from freely running rivers like the one shown in the picture. 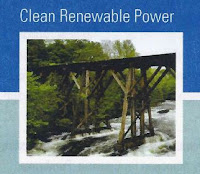 The column to read carefully, however, is “Working With You: Rights-of-Way Access.” You or your predecessor may have deeded an easement or right-of-way (ROW) to PSNH, but no one has deeded anything to Northern Pass. Northern Pass has zero authority over your contractual relationship with PSNH. But read the column anyway. It’s tricky. Watch the sleight-of-hand and ask yourself why Northern Pass is giving you “guidance” on an easement that it does not own and rights of access that it does not have. (Think! Why is Northern Pass being so "nice" to you?*)
Halfway down the column, Northern Pass starts talking about “impediments” or “barriers” that may have been constructed on a PSNH ROW -- things like livestock pens, hayfields, or gates and fences. Let’s add driveways, wells, gardens, septic systems, sheds, swimming pools, tennis courts, garages, even houses or parts of them. Remember, these are ancient ROWs. Northern Pass goes on to say that “the easement requires that a Joint Use Agreement [JUA] be executed to ensure that fences and barriers have gates or openings wide enough to accommodate access by emergency or maintenance equipment.” (As are easement deeds, JUAs are recorded at the county Registry of Deeds.)
Northern Pass has no authority to tell you what the legal relationship between the grantor and grantee of a PSNH easement is, but stay with this for a few more minutes anyway. Why would Northern Pass suddenly  raise the issue of a JUA on the illogical grounds that it will ensure that gates or openings are wide enough for maintenance equipment? If the gates or barriers have been there for years, as many have, they must already be wide enough or PSNH would have had them removed by now. Why does Northern Pass want you to think that you have to sign a JUA with PSNH? If you haven’t been asked to sign one before, why should you sign one now?Ask yourself, what's in it for Northern Pass?
Be aware that under a set of very specific conditions, if your so-called impediment has been on a PSNH ROW for over 20 years continuously, you may have the right not to have it removed. You may have gained what’s called “adverse possession” of a portion of the ROW.  And if you sign a JUA, you may forfeit any right of possession that you have. Northern Pass would like that, of course. You need legal advice from your attorney, who will figure out and advocate for your rights, not "guidance" from a self-serving newsletter that's trying to get you to believe that you are a "Northern Pass landowner."
If Northern Pass wants you to sign anything, insist that Northern Pass pay your cost to consult an attorney of your choice before you decide and before you even discuss the matter.
Northern Pass has no legal right to require you to sign anything. You are under no obligation even to talk to Northern Pass. Your attorney can review your easement deed and advise you of your rights.
Please pass the word to all landowners with PSNH ROWs on their property.