Ayotte: Bury it all along state roads - "We're worth it." 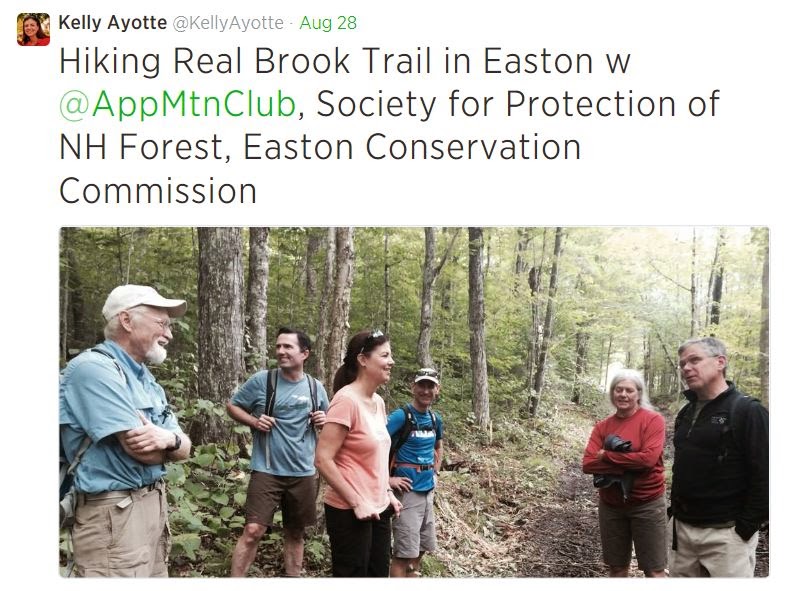 ﻿
Ayotte: All Of Northern Pass Should Be Buried

EASTON, N.H. -- Coming off a hike to the Kinsman Ridge, near where Northern Pass towers would go, U.S. Sen. Kelly Ayotte, R-NH, issued her strongest position to date on the line - that all of it should be buried, along highway corridors.

"My concern is that a big part of New Hampshire and its natural beauty are being jeopardized by the height of the towers," Ayotte said Thursday afternoon to a group of more than a dozen at Easton Town Hall.

The Northern Pass hydroelectric transmission line proposes 180 miles of steel towers about 100 feet high, a portion of which would pass through Easton and the White Mountain National Forest.

Ayotte underscored the concerns of thousands of residents across the state about devaluation of properties near the line, scarring of the natural landscape, and a negative impact on the tourist industry.

"This is about all of us," she said. "It's not just the North Country."

As examples that burial can be done with existing technology, she pointed to other transmission line projects, such as the Champlain-Hudson Power Express in Vermont - initially proposed as an overhead line before aesthetic and other concerns arose - that will include more than 130 miles of line buried along transportation corridors.

"My view is that's what should be done here, but right now we have not seen that alternative produced," said Ayotte.

Northern Pass, a subsidiary of Northeast Utilities, is proposing its line mostly along the existing Public Service of New Hampshire right-of-way, a route that, according to federal filings, would generate about $10 billion in known revenue for NU during the 40-year term of the line.

But if the Champlain Valley is worth line burial, so is the North Country and New Hampshire, she said.

Of New Hampshire's mountains and landscape, she said, "It's a big part of our economy and who we are."

"It's a great resource we all enjoy and has been a great driver of economic strength," said Ayotte, pointing to the millions of tourists who flock annually to the region.

She said Thursday's hike, with members of the Easton Conservation Commission, gave her the opportunity to see the potential impact.

If the Canadian hydro-power is to be imported, Ayotte said I-91 in Vermont or I-93 in New Hampshire should be studied in earnest.

Smith said local properties near where the line would go are already seeing a detrimental impact to their value. He also called northern New Hampshire's unspoiled beauty a legacy.

Ford said a recent law has changed the process of the N.H. Site Evaluation Committee, the state permitting agency for energy projects that must now have two members from the public.

Next legislative session, a bill will be written to create an energy corridor along highways, she said.

For Northern Pass to go through, it must obtain many permits, chief among them a Presidential Permit from the U.S. Department of Energy, which is currently putting together an Environmental Impact Study on the project.

To the agency, the delegates said there are two key elements that were not part of the addendum that warrant consideration and study.

"Specifically, the report does not call for a comprehensive study of the burial of transmission lines along existing highway corridors, nor does it consider a second international crossing other than the crossing at Hall's Stream in Pittsburg," they said. "These two alternatives were not included in the addendum despite the large number of public comments at the scoping hearings requesting investigation into the possibility of these two options."

As senator, Ayotte said she will push DOE to be more transparent and open and also push for a thorough study of entire line burial along transportation corridors.

"This is how the project should be done if it is to go forward," Ayotte said at the Easton gathering. "We're worth it."