Haute coutourier Rikki of the ever-creative & forever-opposed TWIG-Atta Girls unveiled her new spring/summer line in Plymouth NH tonight. What will be the fashion trend for 2011?


The reclusive Rikki herself made a rare appearance to narrate the debut of her new spring/summer collection. She previewed the show by noting that orange is the new black; it is very slimming and looks superb on everyone. First out on the catwalk was Lumber Jan, who modeled Rikki's opening piece for the night, pre-greased orange Labonville chaps complemented by a matching color safety helmet with ear protectors and contrasting mesh visor. Rikki's understated elegance restrained her from accoutering Lumber Jan with an orange Stihl or Husky chainsaw. In fashion, as in life, so often less is more. Next on the catwalk was Recycling Shelly, making a utilitarian and environmentally-friendly statement in her reversible orange and neon lime green sandwich-board poster, "No Northern Trespass!" So bold, so expressive, so true. The piece de resistance, that final work that sums up the designer's intent for the collection, was Hazmat Heather, whose orange jumpsuit revealed fine detail and craftsmanship and a unity of purpose that only a one-piece garment can provide.

The goal of every fashion show is to showcase the designer's overall vision. What is Rikki envisioning for 2011? ORANGE, ORANGE, ORANGE!!!!

After the unveiling, Rikki invited orange fashionistas in the audience to come up and mingle with the models, prizes were distributed to budding designers, and press photos snapped. 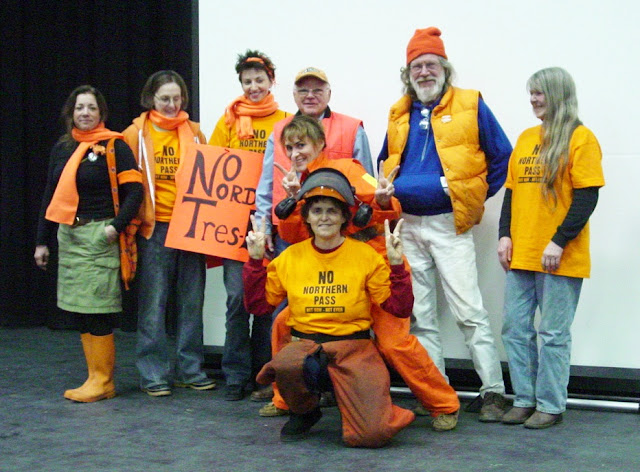