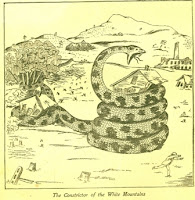 The Northern Pass Project: A New Boa Constrictor in the White Mountains﻿?
(Reprinted by permission of the author)

Rebecca W. S. More, PhD, is a Visiting Scholar in History at Brown University and Adjunct Professor of History at the Rhode Island School of Design. ﻿A part-time resident of Lancaster NH, Rebecca is a descendant of John W. Weeks, U. S. Representative and Senator whose name-sake bill, the Weeks Act (1911), created a national forest in the east and authorized purchase of the land that today forms the White Mountain National Forest. We are pleased to reprint her thoughts, originally published in November 2010, on the similar threats--and opportunities--that faced northern New Hampshire in the first decade of the twentieth century and again now, a century later.

On Dec. 8, 1900, an illustration appeared on the cover of The New England Homestead depicting an enormous boa constrictor, inscribed "The Lumber & Pulp Monopoly," crushing to death farm homesteads in the White Mountains. In the background sits an empty grand hotel on a treeless mountainside. Is this to be the fate of the North Country in 2011, thanks to the proposed Northern Pass Transmission that will burn southward through the region to provide cheap power elsewhere?

In 1900 the livelihood of residents of the White Mountain region was threatened by the timber industry, feeding the consumer demand for lumber and paper elsewhere. As early as 1885, North Country residents were aware of the destructive impact of the industry on hunting and fishing. Thanks to the collaborative action of a broad coalition of concerned citizens, public-spirited organizations and political officials committed to the long-term benefit of their constituencies, the passage of the Weeks Act in 1911 enabled the reclamation of the forests - and the continuance of the tourist and recreational industries throughout the region.

What will be the impact of the proposed Northern Pass high voltage power lines on the health of both people and animals? How will the construction of enormous, humming towers affect those in the path of the lines? Will the area continue to attract tourists to our grand hotels, pristine forest hiking trails, or family activities such as Santa's Village or Six Gun City? Will property values be driven down as they were in the 19th century, forcing farmers to leave the area? Not least, how secure are such towers as a means of transmitting energy?

The citizens of northern Coos County are to be commended for forming an action group to raise public awareness and to challenge the utilities involved to provide substantive answers to the issues and questions the project entails. Like the North County granges, chambers of commerce and women's clubs in 1900, they are addressing the impact of an industry that may have long-term negative consequences for the entire region. Those who have seen the gigantic power lines in Quebec can envision the March of the Towers across the road to The Balsams, through much-photographed Stark, past the White Mountain Regional High School or the Mountain View Grand, through the Society for the Protection of New Hampshire Forests' Rocks Tree Farm and up over up Sugar Hill on its path southward.

There is also serious concern about the security of the entire U.S. electric
infrastructure. A recent article in the New York Times specifically addressed the vulnerability of high voltage power lines to natural phenomena such as solar storms. It described the need for a federal policy that will ensure a resilient, secure infrastructure. How vulnerable are these power lines to the terrorists who have transformed travel across the porous border between the United States and Canada?

As in 1900, the citizens of the North Country, as well as the nation, are wise to come together to challenge the proposed Northern Pass Transmission project and the utility companies sponsoring it to consider the long-term impact on the well being of the region. What role will the elected political leaders play in helping the citizen groups and organizations such as the forest society ask important questions as they did in 1900? The Weeks Act of 1911 bears the name of a farm boy who grew up on the banks of the Connecticut River in Lancaster. The lessons he learned in the North Country about the value of data-driven decision-making and community collaboration enabled him to work with a diverse coalition of citizens, business interests and other public officials, regardless of party affiliation.

Weeks and the coalition of concerned citizens were even able to persuade the lumber industry to support the bill signed into law 100 years ago on March 1, 2011. Will the 2011 coalition be able, with the support of its elected officials, to ask that the electric lines be buried, as was the Portland-Montreal Pipeline project in 1941?

The Champlain Hudson Power Express project is currently placing high voltage direct current cable in waterways or buried along railway routes to minimize impacts to local communities and the environment. Is it too much to ask that the proposed Northern Pass Transmission project provide similar security for the future during the important process of education, review and debate ahead, rather than seeking, like the boa constrictor of 1900, to crush the life out of the White Mountains region?

Bury the Northern Pass is a group of concerned citizens in Grafton County; we work in coordination with our neighbors to the north in Coos County. To join the email list, write to burynorthernpass@gmail.com.