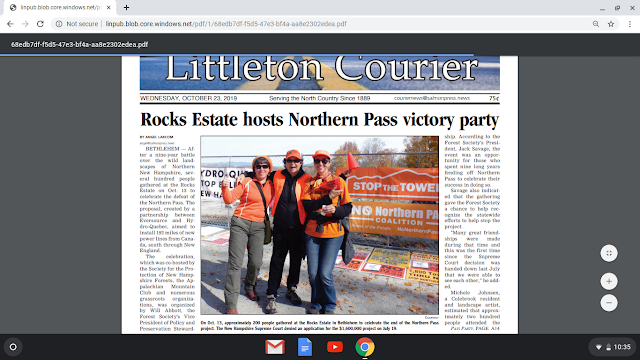 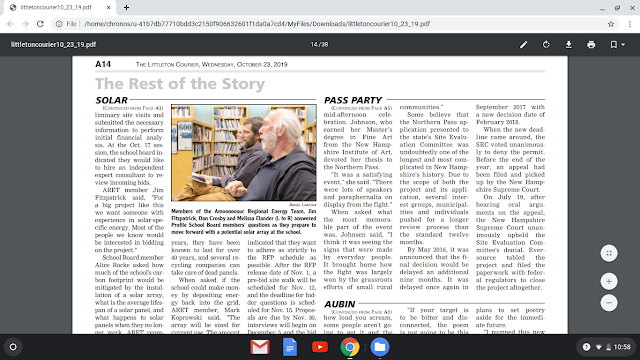 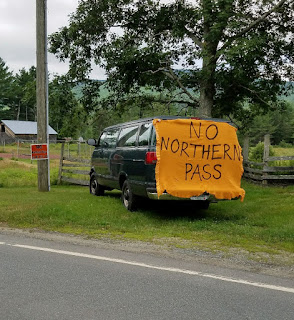 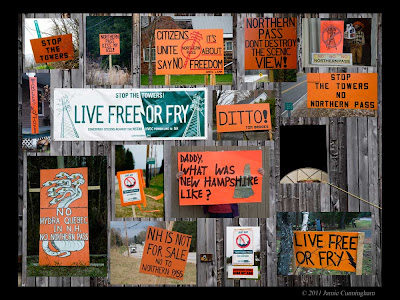 
Editor’s note: State utility regulators voted 7-0 on May 24 to reject a motion to reconsider their decision turning down the $1.6 billion, 192-mile Northern Pass Transmission project from Pittsburg to Deerfield. Project developer Eversource wanted the Site Evaluation Committee to vacate its February decision denying the application, reopen deliberations and consider conditions the utility said would mitigate its concerns. Eversource said at the time that it is not giving up the fight.

With the support of grants from the “‘You Have Our Trust’ Fund of the NH Charitable Foundation” and an anonymous donor, the Sugar Hill Historical Museum will archive materials produced in opposition to the Northern Pass Transmission project from 2010 to 2018. The Town of Easton will provide additional storage space.

The two grants total $2,500. The money will be used to purchase curation materials to preserve the artifacts (e.g., fire-resistant storage containers, acid-free folders for photos and tubes for posters, etc.), for labor to catalogue and enter the accessions into a digital database.

The archive will preserve and document the story of the resistance to Northern Pass by “grassroots” citizens, as well as by conservation, environmental, recreational, and other non-governmental organizations, and by municipal and legislative groups. It will be available to researchers investigating the nature and history of this widespread, enduring opposition movement. The museum may also present exhibits of the archived materials from time to time.

Artifacts to be collected include: banners, buttons, bows, pins, bumper stickers, posters, lawn signs, flyers, post cards, tee shirts, hats, CDs, videos, and related items. Textual material includes newspaper clippings, magazine articles, letters to the editor, etc. Photos of events and of artifacts too large to store will also be preserved.
.
The archive will not conserve regulatory and other documents available online, e.g., public comments to the Site Evaluation Committee, and the museum reserves the right to decline and dispose of material that is redundant or not relevant.

The archive is now accepting donated materials. They may be submitted in person to the Museum during its open hours, Fridays and Saturdays, 11:00 am – 3:00 pm, Memorial Day to Columbus Day, or by U. S. mail. Digital resources should be submitted on a flash drive or memory stick, not by electronic mail, and labeled to indicate the contents. All donated materials should be accompanied by a statement indicating the name of the donor, a brief description of the artifacts, and the date of their creation.

The museum campus is located at 1401 Route 117 across from the Sugar Hill Post Office and next to the Town Hall and Library. The mailing address is Sugar Hill Historical Museum, P. O. Box 591, Sugar Hill, N.H. 03586. 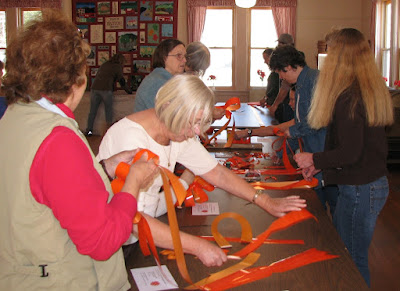 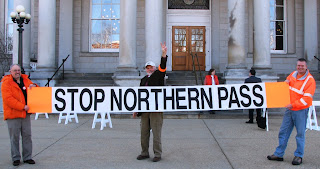 BETHLEHEM — It was a party they’d been waiting to throw for nearly a decade.
A good number of people, though, thought that day – celebrating the defeat of Northern Pass, an event that took place Sunday at The Rocks Estate and drew hundreds of people from across the North Country and New Hampshire – might never arrive.
“I was very dubious this day would come,” said Nancy Martland, of Sugar Hill, one of the many area residents in the fight against the unpopular hydroelectric transmission line proposal with 100-foot-high towers that would have cut through Coos and Grafton counties. “I wanted it so badly, but it just seemed like it was an uphill battle.
Russ Cumbee, of Easton, likened the battle to David and Goliath.
“It was so unusual,” he said. “When did the people win? We were up against so much money and political influence.”
David Van Houten, of Bethlehem, said he hoped a celebration day would come, but didn’t think it would.
“I’ve been through enough of these struggles,” he said, adding about Northern Pass – “Delighted, though.”
Others held out hope during the many years of uncertainty, when they educated themselves and others and attended all or some of the 70 public hearings before the New Hampshire Site Evaluation Committee, which in February 2018 denied Northern Pass’s application, a decision that was upheld in July by the New Hampshire Supreme Court.
“I always felt it had to come,” said Kris Pastoriza, of Easton, also in the fight from the outset.
So did former state Sen. Jeanie Forrester, R-Meredith, who fought against the project from the statehouse, where she supported legislation to stop it.
“I always thought we would prevail,” said Forrester. “I am so proud of all the people because it took everybody working together to get this done. I think this is a model for people to look at for other things in New Hampshire that are not right.”
Susan Schibanoff, now of Sugar Hill and formerly of Easton and who kept residents up to date on Northern Pass happenings through the Bury The Northern Pass blog, said she couldn’t see how opponents would fail, even though “we were up against enormous odds.”
“They had all the money,” she said. “We didn’t have any. Not that we needed it. It was our passion and dedication.”
That passion and dedication overcame a transmission line that went through two iterations, an all overhead line and a mixed line that would have been overhead in Coos and buried for 50 miles along roads beginning in Bethlehem and through Franconia and Sugar Hill south to Bridgewater.
Eversource Energy, the Northern Pass parent company partnering with Hydro-Quebec, stood to gain some $10 billion in revenue and a $4 billion guaranteed profit during the 40-year term of the line, according to its federal filings.
Those in the North Country, though, argued the project would be nothing more than an “extension cord” through the North Country to southern New England and the company’s benefit would come with many detriments up north, including a scarred landscape in a region known for its scenic beauty, hits to the tourism industry and property values, and disruptions to downtowns and businesses during the construction of the buried line.
The SEC agreed, and in a unanimous decision concluded Eversource did not meet its burden of proving Northern Pass would not unduly interfere with the orderly economic development of the region.
Although claiming for years that their project would not impact property values, Eversource, after the SEC decision, conceded it just might and then offered a $25 million pot for those to dip into to compensate for drops in values.
By that point, however, the application period was already over and the project was in its last gasps.
When the state Supreme Court hammered the final nail in the Northern Pass coffin, Eversource withdrew its project a week later.
Sunday’s celebration that drew about 300 people occurred under a fall day with full sun and foliage still on the trees, and just a step and a holler from where the towers would have passed by The Rocks Estate.
“The power of the people prevailed,” said Martland, among the several opponents speaking to the crowd. “Give yourselves a round of applause.”
Jack Savage, the new president of the Society for the Protection of New Hampshire Forests – an opponent of Northern Pass that, as Eversource bought up properties for its route in Coos, would then block the route through conservation easements entered into with other property owners – spoke of the legacy of Northern Pass.
“Other grassroots groups around the country look at what we’ve done and are fighting for something they might not have fought for before,” he said.
Schibanoff said there were three phases to the grassroots fight – “education, education and education,” with opponents educating themselves, then the state, and finally the SEC.
During that time, many area residents attended the 70 evidentiary hearings by SEC in Concord, saw testimony from 154 witnesses, and became familiar with more than 2,000 project exhibits stemming from the more than 20,000-page application by Eversource
Forrester said the fight was truly a bipartisan effort, and thanked the late Executive Councilor Ray Burton, among the first to speak out, former U.S. Sen. Kelly Ayotte, R-NH, and local elected officials that include state Rep. Sue Ford, D-Easton.
For Forrester’s role in the statehouse, it involved legislation, and the the first bill, sponsored by former state Rep. Larry Rappaport, R-Colebrook, prohibited private companies from using eminent domain to take private property for projects that, like Northern Pass, are elective.
What followed then were three Senate bills that showed the feasibility of burying transmission lines in state-owned transportation corridors and changing the rules and the membership of the SEC, to include some members from the public, said Forrester.
“It was nine years, but we did it,” she said.